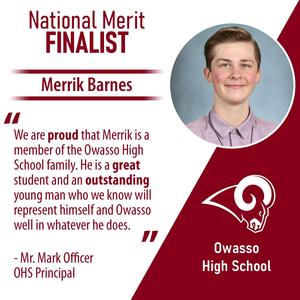 Owasso High School senior Merrik Barnes was recently named as a National Merit Finalist in the 66th annual National Merit Scholarship Program.
Barnes was selected from a group of roughly 16,000 semifinalists named in September 2020 and he has met all the requirements to advance to finalist standing in the competition.
Over 1.5 million juniors in about 21,000 high schools entered the 2021 National Merit Scholarship Program by taking the 2019 Preliminary SAT/National Merit Scholarship Qualifying Test (PSAT/NMSQT), which served as an initial screen of program entrants. The nationwide pool of Semifinalists, representing less than one percent of U.S. high school seniors, includes the highest-scoring entrants in each state. The number of Semifinalists in a state is proportional to the state’s percentage of the national total of graduating seniors.
To become a Finalist, the Semifinalist and a high school official must submit a detailed scholarship application, in which they provide information about the Semifinalist’s academic record, participation in school and community activities, demonstrated leadership abilities, employment, and honors and awards received. A Semifinalist must have an outstanding academic record throughout high school, be endorsed and recommended by a high school official, and write an essay.
All National Merit Scholarship winners will be selected from the group of Finalists. Merit Scholar designees are selected on the basis of their skills, accomplishments, and potential for success in rigorous college studies, without regard to gender, race, ethnic origin, or religious preference.
National Merit Scholarship winners of 2021 will be announced in four nationwide news releases beginning in April and concluding in July. These scholarship recipients will join more than 353,000 other distinguished young people who have earned the Merit Scholar title.